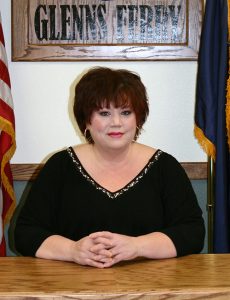 I was born
Someday I’ll die
In between, there’ll be a lot of work and an equal amount of laughter and the hope I leave this world a better place ‘cause I tried very hard to always do right.

There’s a road to normal and a winding path to peculiar, guess which one will lead you to me.

All kidding aside, I’ve lived in, worked in, volunteered in and loved Glenns Ferry for 25 years. The council position is a service position and I want nothing more than to see Glenns Ferry reach its full potential.  I was humbled to be voted in and do not take that trust in me lightly.

Councilman Ken Thompson was part of the 1961 graduating class of Glenns Ferry High School. He spent the first 6 years of his schooling going to school in Bliss. The family moved to Glenns Ferry in 1955 when his mother started teaching in the local elementary school.

After high school, he attended the U of I for 2 years and then went to California to attend college at Chobe College in Hayward, California. He met his wife and spent the next 20 years living there and in B.C. Canada, moving back to Glenns Ferry in 1977. He went to work for the City of Glenns Ferry in 1980 where he worked until retirement in 1994.

Ken served the community as a fireman for 10 years and also served on the school board for 9 years (3 of them as chairman of the board). During his time on the school board the middle school was built as well as the sports complex and the bus-administration building. School also saw the beginning of computers in the classrooms and installation of fiber optics in the school building, which enabled the school to have the internet in each classroom.